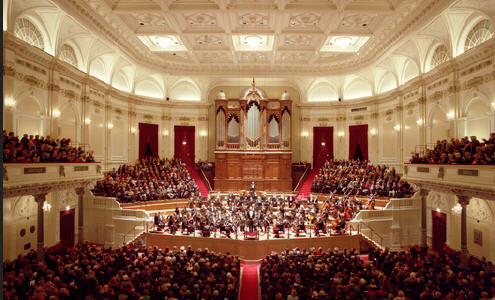 Gramophone released the results of the polls conducted among a panel of renowned music critics for the world’s best symphony orchestras in classical music. Factors considered in the deliberations were concert performances, recording output, contributions made to both local and national communities, and the ability of their music to maintain its iconic status despite the emerging popularity of mainstream music.

Here is the list of the world’s best 10 symphony orchestras in classical music:

10.Dresden Staatskapelle
This orchestra is popular for having its own distinct sound which makes it easily recognizable. It plays music that way it should be: “a chamber-music quality” which simply put, is actively listening to what is going on around and relating how to react to that.

9. Budapest Festival Orchestra
This orchestra celebrates its 25th anniversary this year. Ivan Fischer, the group’s founder, together with the excellent musicians, creates beautiful music with passion and commitment.

8. Los Angeles Philharmonic
This orchestra is known for how beautifully they play both classical and contemporary music.

7. Cleveland Orchestra
The Cleveland Orchestra is said to be America’s European orchestra as this is acclaimed as the Contergebouw and Vienna Philharmonic in one. It is part of the top 10 because of how refined their tone is, with perfect intonation, and absolute warmth when they perform.

5. Chicago Symphony Orchestra
This orchestra is famous for its gleaming brass sound.

4. London Symphony Orchestra
This is an orchestra that is known for its impressive work ethic aside from its snappy style and excellent precision.

3. Vienna Philharmonic
This is an orchestra that plays the most concerts but there are hits and misses because of the different conductors that lead the group. With the right conductor, this can be the best.

2. Berlin Philharmonic
This is one of the few orchestras that have a very distinct sound.